Why we think light festivals are important.

Last year we had the privilege to be one of the selected creative studios that were featured in Spotlight Festival – Bucharest International Light Festival. You can only imagine how honored we were when we got selected to feature another work of ours at this year’s festival. That is why, in this new post, we want to talk to you about the importance of light festivals in general, the impact that is has on the city that hosts and organises this kind of event.

The main idea, when it comes to a light festival, is the way that the city comes together and the way that the buildings and the squares, the different places of a city that are part of the festival set, change the face of the city for a few days, weeks and, why not, months, like Amsterdam Light Festival. One of the elements that set apart the Amsterdam based festival is the fact that the organisers also include in their route the canals. That is why you will see a lot of light installations floating on water. This types of festivals are meant to be for everyone, and a perfect example is Festival of Lights Berlin, a festival that is visited annually by around 2 million people.

Another really important light festival is Fete des Lumieres in Lyon, a festival that started from a plan – the city lighting plan that started in 1989 and in 2004 they reinforced the initial plan. This is a perfect example how technology and art can create something long term and also promote a city at a cultural and touristic level.

One of the things that sets apart Signal Festival from Prague is the fact that they incorporate nature and create amazing shows and illusions on trees with the use of video mapping. They are very aware of the environment and you can see that from the way the installations are placed each year around the city.

The last festival we are going to talk about is Sharjah Light Festival, that is unique because of its location and the atmosphere that it creates around it. Who would have thought that a desert would be an appropriate canvas for a light festival?

When it comes to Spotlight Festival, that is taking place in Bucharest, Romania, for the last 3 years, we are really pleased to talk to you about it because it’s a festival that put our city on the map of the Light Festivals of the world. This festival does so much for the city, it literally shines a light on its most important buildings, and offers the audience a new perspective on one of its most known boulevards, Calea Victoriei.

As we said at the beginning of the article, we were invited to take part of Spotlight Festival, two years in a row, with three different works, a video mapping called Ode to Joy in 2016, which you could say it was a straight up video mapping in comparison with the one we made for this year. Energy of Bucharest (2017) is an interactive video mapping that invited the audience to play with the graphic elements of a building and made some of them feel like giants. Also, for the second edition of the festival in 2016, we had a sculpture, M-Structure, that was inspired by Constantin Brancusi’s work, Infinity Column.

As you can see, we really believe in the importance of festivals like these that show the public that technology and art can come together in a new and totally different way, a way that can connect countries and artists from all over the globe. 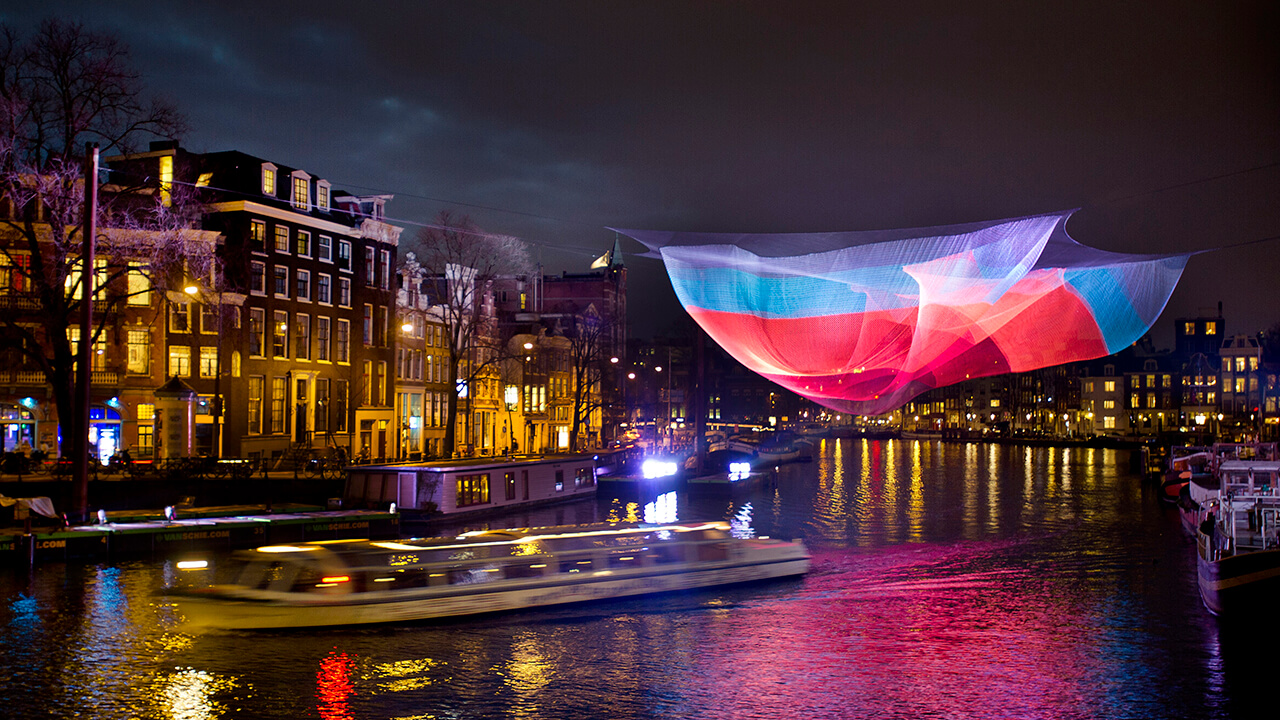